August 2020 out to be an amazing season for RINO hunting, with several notable successes in Wyoming’s primary election!

The First Place WyoRINO Big Game Trophy goes to WY Senate Republican candidate Troy McKeown who knocked out current state Senator and WyoRINO Michael Von Flatern of SD 24 Campbell county. Candidate McKeown won the Republican primary by one of the largest margins in Wyoming history. We guess this is what happens when you are a REALLY BIG RINO.

The Fourth Place WyoRINO Big Game Trophy goes to WY Senate Republican candidate Tim French who slam-dunked WyoRINO Rep. Dave Northrup, SD 18 Park county. Although Rep. Northrup is finishing up his term in HD 50 Park county, he attempted to switch over to the senate in the primary but Republican voters stopped him in his tracks.

August 18th’s primary election results were a confirmation of what WyoRINO.com has believed all along – that Republican voters expect their Republican legislator to actually legislate like a Republican. WyoRINO.com will continue to expose RINO voting records and hold all Republicans legislators accountable.

What is a RINO? A Republican in Name Only 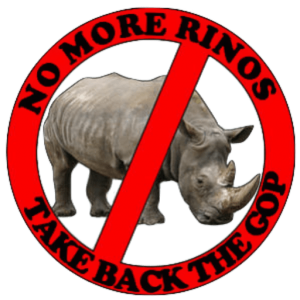 Have you as a loyal Republican, gone to the polls year after year, voting for candidates with an “R” beside their name, trusting they would legislate and vote like a Republican but only to be disappointed?

The time is long overdue to hold politicians accountable for big government, big regulation, big taxation laws – values that the Republican party does NOT support.

WyoRINO.com is an index that is based on the Platform and the Resolutions of the Wyoming Republican Party, which are passed in convention every two years by thousands of elected grass roots Republicans.  This valuable tool scores Wyoming legislators based on their adherence to the timeless Republican values which will always inform and direct our party and country, regardless of current events.  These lofty principles include but are not limited to, adherence to U.S. Constitution, the defense of life, liberty and property, limited government, freedom of religion, the right to bear arms, fiscal responsibility and a free market economy.

If your Wyoming state senator or representative ran on the Republican Party ticket, it is correct and logical to assume that once elected, your legislator will actually vote like a Republican.  Far too often, however, that is not the case.  This is why WyoRINO.com was established – to expose liberal Wyoming Republicans who hold office.

The percentages which are indicated on the Voting Index reflect the cumulative scores based on ten key votes during each Wyoming Legislative session.  These particular bills were chosen by Ride for the Brand, Wyoming due to their easily identifiable traits in relation to Republican values. To examine the bills which were rated and their explanation, click on the WyoRINO Voting Index tab.

We encourage readers to examine how their own state legislators voted on each of the ten key measures. Ride for the Brand, Wyoming believes that a score below 70% indicates a RINO legislator. In the world of education, anything below 70% is considered a failing grade and we agree.

We also encourage readers and voters to commend their legislators for their constitutional votes and urge improvement where needed.