September’s WyoRINO of the month goes to another phony, disingenuous politician that campaigned as a Republican but couldn’t be further from the truth. With a WyoRINO score of 30% in 2021, it doesn’t take a sleuth investigator to uncover the true colors of Wyoming Representative John Romero-Martinez (HD44 – Laramie).

In July of 2020, the Wyoming Tribune Eagle published an interview with Wyoming Rep. John Romero-Martinez (HD44). He was asked what three policy issues set him apart from his opponents.

Rep. Romero-Martinez responded with the following: “The three policy issues that set me a part from my opponent are: I believe in limited government, school choice, and leaders should serve people not special interests!”

We at WyoRINO are wondering if Rep. Romero-Martinez somehow lost his way from what limited government means of if he ever believed that in the first place. Limited government is not only a concept of the U.S. Constitution but something that is strongly held in terms of importance to the Wyoming Republican Party. His voting record reflects his propensity to spend and grow government (see votes on HB49, HB146, HB165, HB171, and SF4).

Another item of tremendous importance to the WY Republican Party is the issue of election integrity. Rep. Romero-Martinez seems to think it is a laughing matter as shown by this Facebook post: 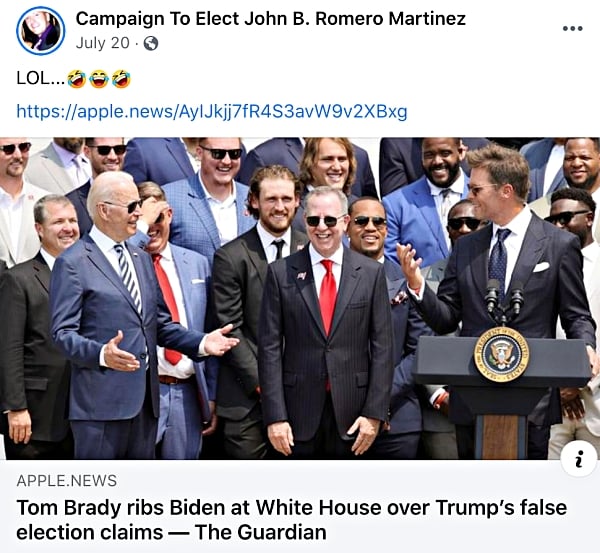 The Wyoming State’s legislative special session, tentatively scheduled for July 12th, has been put off for now. Determining how to appropriate funds for Wyoming from Biden’s American Rescue Plan was to be front and center.

However, there was concern that Medicaid expansion, a policy that the Wyoming State Republican Party has opposed for years, would rear its ugly head during this special session. Thankfully this did not occur.

One of the bright spots this year has been the steadfast commitment (so far) to Republican ideals by many of the newly elected Republican state legislators. WyoRINO hopes that this continues and is a sign of good things to come for our state.